Defences vs. senses for the system behind the character sheet

In this system Defenses show how safe the character is from the hurt of the world. For now, it is best correlated to Armour Class. 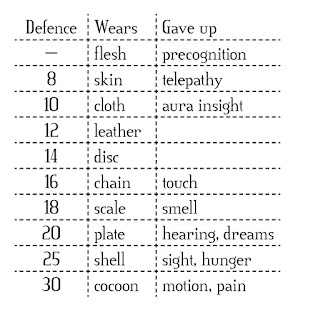 Here the type of the defense is not strictly speaking the same as physical armour, it rather shows the layer of general impedance between the character and the world.  'Disc' can be a full-body shield or an armour made of ceramic discs, plate can be of metal or chitin, 'shell' can be of concrete. 'Flesh' and 'skin' mean character's own flesh and skin, i.e. skeletons are all have precognition, telepathy and aura insight.

The chart is cumulative: plate defense makes the wearer to give up precognition, telepathy, aura insight, touch, smell, hearing and dreams.

I don't know yet how to explain that some entities are capable to partially keep some of the senses and how some other entities lose more than usual. The working idea that certain paths adjust this chart up or down by one or more steps.

As an optional rule the Defenses can be raised in any moment but never or almost never can go back down.