Among other things, the table of miens/states/emotions.

I don't think I'd be able to finish that exercise that Sean McCoy had started. From my experience of doing Inktober and sui generia map, the excitement of a new project goes away in about eight days along with all interesting ideas, and then, unavoidably, a burnout sets up. In the best outcome some kind of second wind inspiration comes eventually, enough to at least drag the project to the finish line, but rarely it is timed well enough to continue with per-day challenge this exercise is.

I don't like planners, which take something as fluid as time and overlay a static grid onto it. The only planner I ever bought – for faux-leather covers, not even for the planner itself – was something from a nearby dollar store, about five years ago, so this is the one I am going to use. That it is off-date doesn't matter in this exercise anyway, only that it has a weekly parsing. It is interesting to me how people started by get those Hobonichi books almost mimicking the original setup, while, from my experience, each such organizer would be a highly individual case: for example, I like that mine has more lines for per-day stuff taking both sides of the weekly spread because this would give me more place to describe the room, while having two lines per day isn't really suitable for how I write. Initially I thought of using a small month section at the right bottom of the spread for the map, but realized it was too small, so I taped the map on top of the spread to flip on or off, and used that week section for a colour chip to remember the mood of the place.

To me the megadungeon is not the end purpose – even if, by some miracle, I'd be able to finish it, it will be very rough, and drab, disjointed thing, without historical layers or overlaying idea that are supposed to be the megadungeon most unique features; it will require an extensive work to make it playable and, even more work to make it interesting. But I do like that I can do a lot of really small places, seven rooms like in "Silent Titans", then turn the page and do another one, and then maybe connect them together in twos and threes if I need a bigger area. 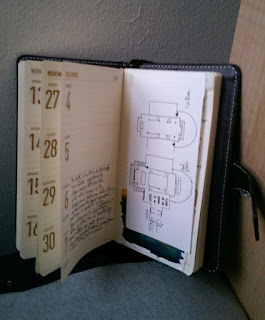 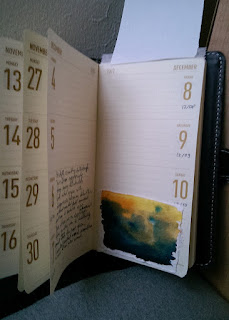 The list of weekly prompts given in the initial Sean McCoy's post is a good list (and is a second reason I want to try: it offers a good variety, so I can see which themes I fail at), but I thought I'd add a few more tools for myself to make it a little more interesting and, hopefully, thus more probable to finish.

• Colour chips, I mentioned before, to paint some very primitive swipes to set the mood/colour of the 7-room weekly dungeons. I have a set of tiny, A8 size, watercolour papers, already pre-cut, which should come in handy.

• Random magazine cutouts (for modern esoterica zine I'll probably never make) and classic art mini-stickers, of which I have too many and never otherwise use.

•  I don't want to put specific monsters in these places. By the unspoken rule of being statted, the known monsters are made to be killed, and I am not currently fine with this notion. Instead, I took a few of better-sounding captchas you get when you when try to download more than one pdf from Googlebooks. These words that might sound a little like real words, or be something obscured in some other language, and they will serve as placeholders for beings. Inhel, ditessi, sioner, hened, bilizen, rityle, mornfire and pellyri, among others: I don't know yet what those beings are, what do they want, how they look like – only what they might do.

• Instead of beings being aggressive I made a table that might serve for random mien, state, behavior or emotion.

• Hexed watercolour paper insert, to paint a map if I'd ever need one. Turns out you can make a common laser printer to print on some types of watercolour papers and it won't smudge when used with water. A really easy way to do same precise lineart but with custom colouring.

• I really wish to use Decker for something; maybe when some of the weekly places are done they can be made interactive in it.

Again, realistically looking at this idea, I don't think it will be enough to carry me across the finish line, but I'd be curious to see how far I can go.